A exciting three days of competition were seen at the UK Masters on the weekend of 4th and 5th June 2016, with more than 130 archers taking full advantage of the opportunity to be part of the invitation-only event at Lilleshall.

The event’s format was a ranking round of 70 metres for recurves and 50 metres for compounds on Saturday followed by an individual head to head. On Sunday, men and women from both disciplines shot a World Archery 1440 round. Barebows and longbows shot on a full single 80cm face at both 50 and 30 metres.

On the first day the weather was overcast with only a light breeze. Later on the temperature picked up and the sun came out.

Colin Williams (compound) became a temporary Llantarnam Archer. Colin got through to the third round before getting knocked out.

Steve Edwards managed the second round but again put in a PB.

Kayleigh Bylis tried and tried but just couldn’t get a big score together and went out in the first round.

Jonathan Dyke did it the hard way but saw off a couple of top seeds and got a well deserved third place.

On Day Two of the UK Masters the weather started off quite cool and overcast with breeze. Later the sun came out and cooked everyone.

Jonathan Dyke tried to duplicate day one and get a win of some sort but a bad 50 cost him, plus one in the woodwork didn’t help. Even the longbowers disowned him as they reckoned it should have gone in the grass to join the longbow club. Still he had a third on Saturday and a final of tenth place.

Steve Edwards had a couple of PB ends and was overall pleased with his day. “Arf an arra” Kayleigh shot a lot better today, apart from trying to break all her arras against the woodwork. The field party are still looking for the front half of one. “Still can’t believe I lost half an arrow… skill of a master bowmen right there…” 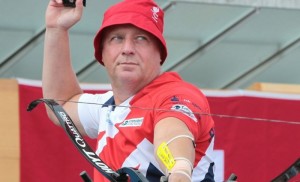 The roving reporters, Mrs Edwards and Peter Dyke went off to see how Dave Phillips was getting on. He’d been having problems. with his seat on the shooting line. He’d managed to get a different one and whilst we were there won a knock-out match which came down to a one arrow shoot off. [Read more on how Dave got on].

Congratulations to Nicola Phillips of St Kingsmark Bowmen on some excellent shooting: she made it to seventh position in the head-to-head on the Saturday and sixth overall after putting in her third Master Bowman score of the outdoor season in the FITA on the Sunday. She will get to shoot there again next year!

A good weekend was had by all. Not all plans came to fruition but as they say “lessons have been learned”.

Click on the links to find the full results from Saturday and Sunday.